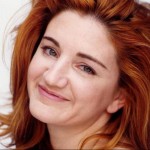 I have been a professional actor for more than 20 years and have worked in online video since its beginnings in 2006 and live-streaming since its inception in 2007. I have a B.S. in Theater from Northwestern University, served as an apprentice at Actor's Theater of Louisville and performed at theaters throughout the US. I was an organizer for both the 2007 and 2008 PodCamp NYC (Unconferences focused on podcasting and social media) and In 2008 I served as Vice-President for Branded and Sponsored Entertainment for online video start-up For Your Imagination, creating video campaigns for brands like Panasonic and Dice.com.

My extensive background in theater, online video, social media and internet marketing have inspired me to create a number of first of their kind live streamed video events, including Better Left Unsaid Tv, the first of its kind, interactive live stream play, "35" the first web drama to stream live over the internet, "Women Respond to Palin", "The Crabbo and Jabbo Show", a live interactive talk show about technology and art, and most recently the WiredArts Fest, the first live-streamed performing arts festival which presented over 20 theater, dance and music companies, live, to more than 60,000 viewers from all over the world.

I am a new-media consultant, and have spoken about online video and social media and the performing arts at conferences and meet-ups throughout the United States.